What Happens When An Airbag Goes Off? 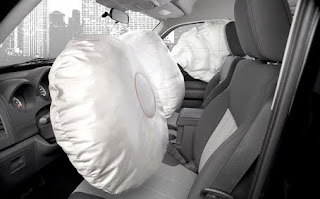 Most people simply take for granted and have little appreciation for the technology that's contained in an automotive safety airbag. Still yet, another commonality that virtually all people share is the collective desire that their airbag goes unused for the life of their vehicle.
Consider this. Of all the parts on your car, only your airbag is designed and manufactured to have a zero tolerance failure rate. This means that if there is one part on your car that simply must work when it is called on to do so with "no exception", that is your airbag.
So then just what are the series of events that transpire to inflate your airbag in the event of an accident? Also how are all of the components designed to be foolproof and at the tail end, what actually happens when an airbag goes off.
Amazingly, believe it not, it is a relatively sizable explosion that happens just inches from a person's face that actually inflates the airbag itself. This is the very reason why, in spite of the concept being around since the 1950s, it took years for working models to be developed.
The difficulty all along has been how to contain and control an explosion of this magnitude, so close to a person's face. In a fraction of a second, the explosion goes off, fills the bag and then is safely dissipated. All in the time it takes you to snap your fingers.
It all begins with a sensor that is designed to be tripped by inertia. A simple description would be a metal ball contained in a tube that is forced forward by the force of an impact. A device of this type is foolproof because it requires the sudden stop of forward motion to be activated.
In a fraction of a second, before the occupant who's involved in the crash has time to make contact with the dashboard of their vehicle, an electrical impulse is sent from the sensor to the trigger located inside the airbag. The explosion is then activated.
It's not a normal explosion as one might imagine. You see, rather than a heat activated reaction, such as you would see when a firecracker explodes, a chemical reaction is used. It's the same type of explosion you would see if you were to drop Alka-Seltzer tablets in a bottle of soda pop.
Sodium aside and potassium nitrate are combined to instantly create a large volume of nitrogen gas that fills the airbag. So heat is a byproduct as this chemical reaction is exothermic but nowhere near the amount of heat as other explosive reactions would produce.
So now the bag is filled. However; one problem that had hindered the development of Airbags for so long was preventing the bag itself from causing injuries. Yes it's a soft bag but just like water, when it is impacted at a high speed, it has the same effect as hitting concrete.
The problem was solved by developing an airbag that has a series of holes in it. These gas release holes are sized and positioned in such a way that they allow the bag to be filled as quickly as is needed, yet deflate and recess as the person's body impacts it.
Article Source: ezinearticles.com
Posted by Corby's Collision at 12:15 AM